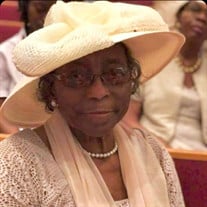 Sue Mae Wells, January 10, 1931 - July 18, 2021, a resident of Mayesville, South Carolina, died peacefully at her youngest son's (Michael) home in Charlotte, North Carolina. Sue was born and raised in Mayesville, South Carolina and was raised by her grandparents, West and Sue Belle Plowden. She was preceded in death by her husband, Ben Wells, Sr. and son, Charlie Wells. Throughout her years as a member of Unionville A.M.E. Church, she served as a member of the Gospel Choir, Pastor's and Pulpit Aide, Missionary Board, Steward, chair of Stewardess Board #1, and advisor to the Sunbeam Choir. In her early years, Sue worked for Johnson Cleaners and later Georgia Pacific. Prior to retiring, she and her son Clayton opened a dry cleaners in Mayesville, South Carolina. She was the mother of eight sons, one daughter, twenty-one grandchildren, and twenty-two great grandchildren; her family was her pride and joy. She helped raise her eldest grandchildren in the home, and they affectionately called her "Ma' Ma". After retiring, she worked for Lee County School District as a bus driver and food service personnel to spend more time with her grandchildren who rode her bus. She also enjoyed cooking large holiday meals for her children and grandchildren as they gathered at her home for food, fun and fellowship. Sue was also committed to community service. She was a member of the Lee County National Council of Negro Women, the organization whose members were instrumental in establishing the historic Mary Mcleod Bethune birth marker and park, which is located a few hundred yards from her home. Her house was often the gathering place for children in the neighborhood. Sue's remaining immediate family members include: one daughter, Eva Jones of Mayesville, South Carolina; seven sons, Ben Wells, Milton (Mary) Wells, Melvin (Denise) Wells, Clayton (Tammy) Wells, and Carl (Wanda) Wells all of Columbia, South Carolina, Frederick (Dylena) Wells of Mayesville, South Carolina and Michael Wells of Charlotte, North Carolina; three sisters, two brothers, twenty-one grandchildren, twenty-two great grandchildren, seven sisters-in-law, four brothers-in-law, and a host of nieces, nephews and other relatives. To access the livestream of the service, please go to Facebook.com, search for Palmer Memorial Chapel Inc., and "like" the page. The livestream video will begin at the designated time of the service.

The family of Sue Mae Wells created this Life Tributes page to make it easy to share your memories.

Send flowers to the Wells family.