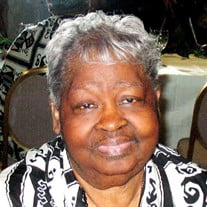 On Monday, February 10, 2020, the Lord sent down His angels to bring another soul to their heavenly home. Susie Jane Marshall Malone quietly left this earthly realm with her family by her side. Born in Abbeville, South Carolina, on July 1, 1936, she was the first of three children born to the late Henry Lee and R0sa Ella Hill Marshall. Susie attended Abbeville County Training School and graduated in the Class of 1954. Raised in St. Peter AME Church in Abbeville, she served faithfully on the Usher Board and wherever her gifts and talents were needed. In 1954, she relocated to Washington, DC, where she was employed first at the Hoppes Shop and later at the National Institute of Health. Later she was employed by the DC Public Schools. While in DC, she met the love of her life, Weldone Edmond Malone, and they united in holy matrimony on February 12, 1955. To this loving union, five children were born. She and Weldone were members of Greater First Baptist Church and she later joined Metropolitan AME Church in Washington, DC, where she served on the Choir and the Missionary Board. In 2001, her beloved husband Weldone transitioned to his heavenly home. In 2002, she moved to Columbia, South Carolina, where she could relax and enjoy her bingo, Pokeno, needlepoint, arts and crafts, and make jewelry and calendars. Upon arrival in Columbia, she initially worshiped at Pine Grove AME Church before becoming a founding member of Grace Heritage Ministries. She was very active in her church and loved her church family. In addition to her parents and husband, she was preceded in death by a sister Christine Pugh. She leaves to cherish precious memories two daughters: Sabrina Bowling of Columbia and Kimberly (Melvin) Parrott of Raleigh, North Carolina; three sons: Edward (Linda) Malone of Ft. Washington, Maryland, Christopher (Victoria) Malone and Gilbert Malone, both of Columbia; seven grandchildren; thirteen great-grandchildren; one sister Paretha Clinkscales of Abbeville, South Carolina; nieces; nephews; cousins; other relatives and friends.

On Monday, February 10, 2020, the Lord sent down His angels to bring another soul to their heavenly home. Susie Jane Marshall Malone quietly left this earthly realm with her family by her side. Born in Abbeville, South Carolina, on July 1,... View Obituary & Service Information

The family of Susie Marshall Malone created this Life Tributes page to make it easy to share your memories.

Send flowers to the Malone family.