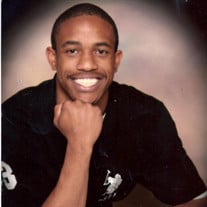 “A good name is better than a good ointment and the day of one’s death is better than the day of one’s birth.” Ecclesiates 7:1 Terrance Maurice Gayle departed this earthly at the tender age of 30 and entered to eternal rest on Wednesday, January 1, 2020 in Charleston, SC. Terrance was the son of Mr. Terry Gayle and Mrs. Sadie McCray Gayle. He was educated in the public schools of Sumter County and was a graduate of Sumter High School in the Class of 2007. He did further studies at Shaw University College in Raleigh, North Carolina. Afterwards, he worked several jobs, beginning with Santee Print Works, Schnieder Company, The Bicycle Corporation and most recently Becton Dickinson of Sumter. Terrance accepted Christ as his Savior at a young age and joined Union Baptist Church, Rembert. He later joined Mt. Pleasant A.M.E. Church, as a musician and displayed his love of faithful service by using his blessed hands as a keyboard player for 10 years as “Minister of Music.” He also served on the Mt. Pleasant Trustee Board. Terrance also blessed other various churches with his musical talent. In his spare time, he enjoyed life’s simple pleasures, such as, football, baseball, computers, playing the keyboard and most of all spending time with his children. Terrance was smart, fun loving and always smiled. He was known as a gentle giant, who had a humble demeanor with much respect, willingness and was supportive in helping his family and others. The lives he touched through his music, his smile and his kind heart has left an indelible mark upon our hearts and memories that will last forever. Terrance was preceded in death by a daughter, Kameria Gayle, paternal grandparents, James McCray and Elijah, Sr. and maternal grandparent, Julia Gayle. Those left to cherish precious memories are his parents, Terry and Sadie M. Gayle, two daughters, Caden Gayle and Mahogany Gayle, two sons: Chase Samuels, and Jayden Gayle; grandmother, Elizabeth McCray; aunts: Gloria Nathaniel, Bernice Gayle Slater, Katie Mae Gayle and Edith Gayle; uncles: James Lee, Andrew, Jimmy Lee McCray and Jessie (Brenda) McCray all of Alabama; a special aunt: Lauretha (Benjamin) McCray of Anderson SC; his devoted friend and Fiancee’ Bazh Ragin; his very special buddies: Denzel Colclough, Quentin Bennett, Corey Mack and Glen Mack, Jr.; and a host of cousins; other family members and friends.

The family of Terrance Maurice Gayle created this Life Tributes page to make it easy to share your memories.

“A good name is better than a good ointment and the day of one’s...

Send flowers to the Gayle family.