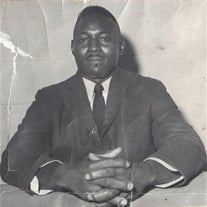 Mr Thurmond Lee Jamsion was born January 7, 1935, in Norway, SC. He was the son of the late Dan James and Mattie Jamison. He departed this life on Thursday, August 31, 2017, at Palmetto Health Richland Hospital after a lengthy illness. Thurmond was educated in the public schools of Norway, SC. He was a dedicated, hard worker who enjoyed life to the fullest. He loved looking sharp from head to toe and had a no-nonsense by loving personality, one that set high standards for his children. A lover of all kinds of cars, Thurmond was the family "Fix It Man" and mechanic. He also enjoyed fishing, watching football, Monday night wrestling, and Friday fish fry nights with his wife of 62 years. Thurmond also served as a Mason with the Masonic Temple. Thurmond retire on June 30, 1992, after 39 years of state service. He began as a nurse's assistant in November 1953 at the State Mental Hospital until 1971 when he became a custodian with General Services. In November 1976, Thurmond left General Services to move to the Board of Health after its relocation from the Wade Hampton and Calhoun Buildings downtown to the Sims/Aycock Building. His tenure with the agency began as a Postal Clerk in the Bureau of Business Management where his duties included: working with forms and office supplies; delivering mail between State Park and the post office. Thurmond was later reclassified as a Supply Specialist I when the Merit System renamed the positions. He progressed to Supply Specialist II over his last seven years of service. Thurmond under 3 Commissioners at DHEC; his most memorable moment occurred during the 1975 Columbia snowstorm. He and Tony Ellis (then Director of Business Management) were the only ones to show up for work. Thurmond recalls the two of them getting in the old "Blue Goose" (DHEC's old blue pick-up truck) and going to pick up the mail from the post office. Thurmond was one of the unsung heroes of the agency; he made a positive contribution to the image of DHEC. In addition to his parents, he was preceded in death by a son Anthony Stroman (Mua). Those left to cherish precious memories are his bride of 62 years Gussie Mae Jamison; 3 sons: Thurmond "Squeaky" (Sheryl) Jamison, Derrick (Janie) Pringle, and Ronney Jamison, all of Columbia; 4 daughters: Jacqueline Jamison, Sherry Renee Ford, Wanda (Rodney) Lewis, and Alethia "Scooter" (Adrian) Clifton-Glover, all of Columbia; 5 grandchildren: Quinton (Cassandra) Stroman, Shaun C.A. Ford, Micah Jamison, Matthew Jamison, and Whitney Lewis; 2 great-grandchildren: Aubree Stroman and AJ Stroman; 4 brothers: Henry Lee James, Arthur James, Dan James, Jr., and Murray James; 1 sister, Reatha Bell Felton; 7 brothers-in-law:Edward Clifton, Furman (Edna) Clifton, Henry (Rena) Clifton, Herman Clifton, Robbie Lee (Brenda) Clifton, James Clifton, and Robert Allan (Pat) Clifton; 2 sisters-in-law: Patty Clifton-Ackerman and Betty (Perry) Smith; and a host of other relatives and friends.

Mr Thurmond Lee Jamsion was born January 7, 1935, in Norway, SC. He was the son of the late Dan James and Mattie Jamison. He departed this life on Thursday, August 31, 2017, at Palmetto Health Richland Hospital after a lengthy illness. Thurmond... View Obituary & Service Information

The family of Thurmond Lee Jamison created this Life Tributes page to make it easy to share your memories.

Send flowers to the Jamison family.