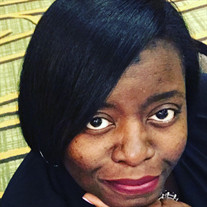 Tiffany Elizabeth Mayes, the eldest daughter of Mr. Robert Mayes of Chicago, Illinois, and Ms. Priscilla Barbara Mayes of Columbia, South Carolina, was born on October 15, 1971. After a short illness, Tiffany Elizabeth went home to be with the Lord at Palmetto Baptist Hospital. Tiffany was educated in the public schools of Richland County District One, where she was a 1989 honor graduate of Eau Claire High School. After Eau Claire, Tiffany attended Benedict College and Midlands Technical College where she studied business. At the tender age of two years old, Tiffany began her love and affection for reading. She would often be found reading books to her cousins. To their amazement, she was only pretending. Tiffany enjoyed spending time with her family and friends, shopping, going to the movies, and traveling. She had an innate ability to recall events due to her impeccable memory. As a young adult, Tiffany joined First Nazareth Baptist Church and dedicated her life to the Lord. She used her short life on earth to help and serve others. Tiffany would often volunteer and participate in the Relay for Life. During her early years, Tiffany was employed as a childcare worker at Jay's Childcare, supervisor for Inter-Media Marketing, and loan officer for Palmetto Citizens Federal Credit Union. During her later years, she served as a coordinator of the National Service Support Team at Verizon Wireless for approximately eighteen years. Tiffany was a caring and compassionate daughter, sister, and friend who loved all things cheetah. Her alias was "Cheetah Girl." Tiffany was preceded in death by her paternal grandparents of Chicago and her maternal grandparents of Columbia. The loved ones who will always cherish her memories are her parents: father, Robert Mayes, Jr., of Chicago, and mother, Ms. Priscilla Barbara Mayes, of Columbia; her sister, Ms. Tasha Mayes, of Columbia; eight aunts; four uncles; special godparents, Sam and Adrena Davis; and a host of cousins and friends from Columbia and Chicago who will miss her bright spirit.

The family of Tiffany Elizabeth Mayes created this Life Tributes page to make it easy to share your memories.

Send flowers to the Mayes family.