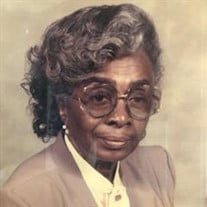 Trifenia Elie departed this earthly life and entered into eternal rest on Friday, September 6, 2019 at Prisma Health Tuomey in Sumter. Born in Sumter County, she was a daughter of the late Henry Elie and Azalee White. Trifenia lived a long and joyful life. She was the golden age of 102 years when she transitioned to her heavenly home. She received her education in the public schools of Sumter County. Ms. Elie was a former member of Mt. Pisgah A. M. E. in Sumter. In later years, she joined membership with the Walker Avenue Church of God, Sumter. She loved God, and was known as a God fearing, Bible believing, born again Christian. Her gift of servitude was the joy of her life. Whenever there was a program at her residence in the Shiloh Manor Apartments, she was the first to volunteer. As a Christian, she knew her duty was to visit the sick to serve people and she did it gladly. In her spare time, her hobbies included sewing, gardening and especially attending her flower garden. Trifenia appreciated and loved her family and friends. She will sincerely be missed by her friends at the Shiloh Manor Apartments. In addition to her parents, she was preceded in death by two children, Edward Jefferson and Gardenia Davis and all her siblings. Those left to cherish precious memories include: her daughters, Elizabeth Simon and Alveta James,Sumter, SC. and Daniel Williams, Bronx, NY, (raised in the home as a son; eight grandchildren, Michael L. (Ronda) James, Bronx, NY, Kimberly ( Charlie) Hughes, New Brunswick, Canada, Mary “Denise” Simon, Atlanta, GA, Shedricka Jefferson, Columbia, SC, Pamela Murdock, Norfolk, VA, Bianca Diaz, Bristol Conn. , Kenneth L. (Pamela) Simon, Sumter, SC and Edward Jefferson, Greenville, SC; 11 great grandchildren, 18, great-great grandchildren, one great-great-great grandchild; one daughter in-law, Rebecca Jefferson and one son- in-law, Robert Simon both of Sumter, and a host of other relatives and dear friends.

Trifenia Elie departed this earthly life and entered into eternal rest on Friday, September 6, 2019 at Prisma Health Tuomey in Sumter. Born in Sumter County, she was a daughter of the late Henry Elie and Azalee White. Trifenia lived a long... View Obituary & Service Information

The family of Trifenia Elie created this Life Tributes page to make it easy to share your memories.

Trifenia Elie departed this earthly life and entered into eternal...

Send flowers to the Elie family.