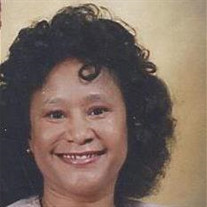 “But those who wait on the Lord shall renew their strength; They shall mount up with wings like eagles; They shall run and not be weary, They shall walk and not faint.” Isaiah 41:31 A Phenomenal Woman Rev. Vara Merle Smith Burns was born in Union, South Carolina on July 28, 1951. She was raised by her mother, Ms. Earline Thompson, her grandparents, aunts, and uncles. They all referred to her as Merle. It was her mother who single handedly raised her and four other siblings that encouraged her to work hard and believe success would come her way. Even though she was a sickly as a child, Rev. Vara graduated from high school and graduated with honors from Johnson C. Smith University with a degree in biology. She would later earn a Master’s degree in nutrition from Winthrop University. She was employed as one of the first black faculty members at the Medical University pf South Carolina teaching physicians about nutrition. It was in Charleston that she met and married Rev. Harry Burns. After five years at MUSC, she coordinated a research project studying the development of esophageal cancer in black men at large hospitals in South Carolina, Georgia, and Florida. Following that research project, Rev. Vara was Director of the WIC program helping thousands of families at the Franklin C. Fetter Clinic for five years. It was there that she decided to accept an administrative internship from the National Institute of Health to learn how to run community health centers. She completed the program and the graduation was held at John Hopkins Hospital. She was offered jobs in New York, Utah, and California. Rev. Vara was not finished with doing medical research. She joined a team of doctors and other medical professionals on a fact finding mission to China and Hong Kong for one month. It was there that they made recommendations to improve health care in that foreign country. In 1991, Rev. Vara returned for a brief period to teach at her old alma mater, Johnson C. Smith University. She would later enroll in a PHD program studying nutrition and epidemiology at the University of Pittsburgh. During her studies, she was afforded an opportunity to do medical research on infant mortality at Elizabeth Hospital in Barbados for two full summers. However, upon her last visit, it was determined that she had developed mini strokes that would lead to her withdrawal from her academic studies. She only lacked a few more courses before finishing her PHD. Her husband felt the need to return to the Carolinas so that they would have family support. The Burns family never gave up on their desire to do medical missionary work overseas. The Burns got ordained in the AME Church in 1986. In their early years in ministry, they sent thousands of dollars to help build churches and schools in South Africa. After returning from Pittsburgh, they built a water well in Nigeria providing fresh water to thousands. There has been a cry from the villages to build yet another well and start a health clinic. Rev. Vara was diagnosed with M.S. and chronic dementia in 2007. Even though she has pastored her own churches, State College AME Church in State College, Pennsylvania and Nesmith AME Church in Pittsburgh, she realized it was best to join her husband in his pastorate due to her failing health. This phenomenal woman has been a college professor, faculty member at a major medical center, author, done research around the world and provided pastoral care to thousands that have crossed her path. Rev. Vara loves her family. She has three sisters, Marion, Laverne, Vivian, and one brother, Bennie. The Burns have three grown children, Kathryn, Ashanti, and Emmanuel. They have eight grandchildren and three great grandchildren. Rev. Vara came to church every Sunday to get her shout on even in the midst of her pain and suffering. She loved the Lord and her family have poured out their hearts to the members of Orangehill AME Church. On this day that the Lord has made, Rev. Vara and Rev. Burns wish to thank the members of Orangehill, their family, and friends for taking the time out to remember a phenomenal woman.

&#8220;But those who wait on the Lord shall renew their strength; They shall mount up with wings like eagles; They shall run and not be weary, They shall walk and not faint.&#8221; Isaiah 41:31 A Phenomenal Woman Rev. Vara Merle Smith Burns... View Obituary & Service Information

The family of Rev. Vara Merle Smith Burns created this Life Tributes page to make it easy to share your memories.

“But those who wait on the Lord shall renew their strength; They...

Send flowers to the Burns family.