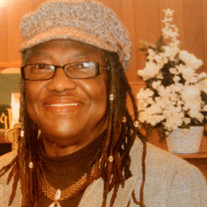 Vermell Edwards was born February 26, 1935 to the late Susan Dargan and Oscar Moore Sr. of Sumter, SC. She entered into eternal rest on Thursday, February 11, 2016. Vermell attended the public schools of Dalzell, SC. Vermell joined High Hills A.M.E. Church at an early age, accepting Jesus Christ as her Savior. Vermell met Jeremiah Edwards and they were united in Holy Matrimony. The couple moved to Baltimore, Md. in the early 1950’s and to this union six children were born. She had several jobs while in Baltimore, Md. over a 42 year period. Ultimately, she worked for Baltimore City Public Schools for 30 years and subsequently retired. Vermell was a caring mother, grandmother, great grandmother, and a trusted friend. She treasured life and touched the lives of all the people she was blessed to be around. Vermell had tremendous faith in God. She was a member of the Mount Calvary Freewill Baptist Church for 40 years while in Baltimore. She belonged to the Usher Ministry and sung on two choirs during her time there. After moving back to Sumter, SC in 2006, Vermell reunited with High Hilsl AME and enjoyed being a member of the choir. She was actively involved in the Sumter community and participated in the following groups: Sumter Senior Citizen Center, Golden Girls, The N.A.Johnsonaires, Stewardess Board #3, The High Hills A.M.E. Missionaries Society and sang with both High Hills A.M.E. Rejoice Choir and the Majestic Singers. She was also a member of Daughters Promise National Ministry and the Eastern Star. Vermell was truly a sweet spirit, kind hearted women who was always giving and available to assist someone- no matter what time or hour of the day. She loved her family, neighbors, and friends. Vermell had a great sense of humor and delighted in seeing people laugh and enjoy themselves. She was preceded in death by: her parents, her husband, Jeremiah, one son Marvin, two sisters, three brothers, and a dear companion, Nathaniel Gregory. She leaves to cherish beautiful memories: one daughter, Mary Davis, Baltimore, Md.; four sons: Jeremiah (Renee’) Edwards and Vernon Edwards, Baltimore Md., Bobbie Edwards and Arnold(Tanitrice)Edwards, Sumter, SC; eight sisters; three brothers; 13 grandchildren; six great-grandchildren; and a host of nieces, nephews, other close relatives and friends.

The family of Vermell Edwards created this Life Tributes page to make it easy to share your memories.

Send flowers to the Edwards family.