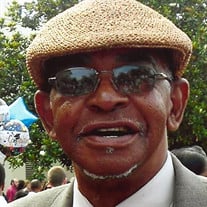 Vernard Black of Lillington, North Carolina, departed this earthly life and entered into eternal rest on Tuesday, July 4, 2017 in Bunnlevel, North Carolina. Born in Sumter, South Carolina on September 24, 1951, he was the youngest of nine children born to the late Isaac Black and Maggie Oxendine Black. Mr. Black was educated in the public schools of Sumter County and was a graduate of Lincoln High School, the Class of 1969. Mr. Black did further studies at the former Sumter Area Technical College and continued college courses while in the military. Mr. Black became a Christian at a young age in Sumter. His spiritual memberships included: Mount Olive Baptist Church in Harrisburg, Pennsylvania, Lillington Grove Original Freewill Baptist Church in Lillington, North Carolina and finally with Williams Chapel Church in Springs Lake, North Carolina. During his spiritual journey, he served as Trustee, as an usher, participated on various committees and on church choirs. Mr. Black served his country in the United States Army and was a proud Vietnam War Veteran. During his military tenure, he was stationed at various bases throughout the United States. He received numerous declarations and medals for his service that included: The National Defense, Vietnam Service, Vietnam Campaign, Vietnam Cross of Gallantry w/Palm medals and Expert (Rifle). Mr. Black was a hard and dedicated worker since a teenager. This commitment steered his employment history to include a career in the United States Army, to be employed by New Cumberland Army Depot, and worked with home improvements. In his spare time, he enjoyed fishing, volunteering, gardening, home improvement projects and socializing with his friends and family. He was a member of the Veteran Foreign War Post #6018 and the American Legion. In addition to his parents, he was preceded in death by his son, Vernard Black, Jr., and a sister, Dorothy Black Samuel. Those left to cherish his memories are: three daughters, Andrea R. Black of Columbia, South Carolina, Vanessa T. Black, and Veronica Black, both of Rock Hill, South Carolina; six grandchildren, Jarai (Shaniece), Daneisha , Desiree, Elijah, Mya, and Josh Black; former wife, Deloris B. Black; six sisters, Shirley B. Harris, Ann B. Jenkins and Maggie Black all of Pennsylvania, Mary C.B. (Willie) Bradley, South Carolina, Betty B. Adams, North Carolina and Yvette B. Mitchell of Georgia; one brother, Isaac (Alberta) Black, Jr. of North Carolina and a brother-in-law, Frank Samuel of South Carolina, and a host of other relatives.

Vernard Black of Lillington, North Carolina, departed this earthly life and entered into eternal rest on Tuesday, July 4, 2017 in Bunnlevel, North Carolina. Born in Sumter, South Carolina on September 24, 1951, he was the youngest of nine children... View Obituary & Service Information

The family of Vernard Black created this Life Tributes page to make it easy to share your memories.