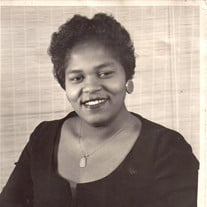 Ms. Vivian Tindal Cox, born August 6, 1934, transitioned peacefully from this earth to her eternal rest on January 24, 2018. She was the youngest of five children born to the late Julius Tindal and Nettie Montgomery Tindal. Vivian enjoyed spending time at her father's store and meandering about the large farm her father owned. Vivian was a faithful and active member of Mt. Pisgah AME throughout her childhood and young adulthood. After the death of her mother Nettie when Vivian was 11 years old, her father married the then Camilla Holiday. Vivian was educated in the Sumter County School System, graduating from Lincoln High school in 1952. Vivian knew she had no skill or desire for work on her father’s farm and informed her father that she wanted to be a teacher, just like her mother Nettie. Vivian entered Allen University in Columbia South Carolina. There she made many friends and enjoyed several activities including pledging Zeta Phi Beta Sorority, Incorporated and joining the Allen Concert Choir. It was on the choir that she met Robert Cox Jr. Following graduation, they would marry at Mt. Pisgah AME, and though the marriage ended, the friendship endured. The two educators settled in Helena, Arkansas where Vivian gave birth to their son Ivan Jerome. Robert’s mother Alberta was tasked with moving in with Vivian & Robert to assist Vivian after the birth of her son.. Alberta soon moved out after a couple of weeks because Vivian told her repeatedly “I got it. I can do it. I don't need any help.” Such was a recurring theme in Vivian's life. She was incredibly giving, but often refused help herself. She often said she knew her help came from the Lord. Vivian and Ivan soon returned to Sumter, South Carolina as the Sumter School District was eager to employ her. She began teaching home economics while simultaneously obtaining her Master's Degree from South Carolina State College. After a few years of teaching in Sumter, Vivian joined her sister Ruby, who was a nurse, in New York. With her young son in tow, Vivian set out for Queens where she taught in the New York City teaching system for over 30 years. While in New York, Vivian was a member of Allen AME in Queens, NY where she sang on the choir and taught Sunday school. Following her retirement, Vivian traveled the world. She visited locations such as China, Alaska, France, England, Germany, Jamaica and the Bahamas. Vivian truly enjoyed an active social life, making a dozens of good friends, and hosting legendary parties. In 2002 Vivian decided to return to Sumter, South Carolina as her son was now a resident of South Carolina. The location change did not hamper her travels or social life. In addition to joining the VFW Auxiliary, YMCA, and hosting her annual King Day Celebration, she happily reconnected with many friends and family from her childhood.. She renewed her commitment to Mt. Pisgah AME where she sang on the choir, taught Sunday school, assisted in the Breakfast Ministry, and served on the Stewardess Board. . Vivian moved to Rock Hill, South Carolina at Brookdale Chandler Place in 2016, where she could often be found holding court in the apartment building's lobby. Vivian went home to be with her Heavenly Father on Wednesday, January 24th at Wellmore of Tega Cay Rehabilitation Center. Preceding Vivian in death are her: parents and stepmother; four siblings: Frank, Ruby, Willie, and Florence; two grandsons Ivan Jr, and Matthew; and three nephews, Ronald Fraser, Jr., Vandell Tindal, and Connie Tindal. Vivian leaves to honor her memory: her beloved and cherished son, Ivan (Lakeshia) Cox and her grandson Mason Cox of Blythewood, SC: nieces and nephews: Ophelia Tindal Dixon of North Carolina, Sandra (Jessie) Johnson, Cheryl (Guy) Scantlebury both of New York, Ronald Tindal of North Carolina, Renee (Lewis) Scott, Fran Freeman, both of New York and Derrick Freeman of Virginia. In addition there are 23 great nieces and nephews, numerous cousins including Julian (Jacqueline) Tindal of Rock Hill, SC,; her godson David (Ruby) Thrower of Sumter; and many, many wonderful and true friends.

Ms. Vivian Tindal Cox, born August 6, 1934, transitioned peacefully from this earth to her eternal rest on January 24, 2018. She was the youngest of five children born to the late Julius Tindal and Nettie Montgomery Tindal. Vivian enjoyed... View Obituary & Service Information

The family of Vivian Tindal Cox created this Life Tributes page to make it easy to share your memories.

Send flowers to the Cox family.