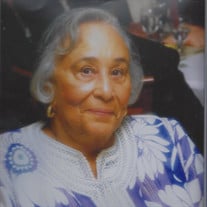 Vivian Lorraine Chappelle Robinson, the only child of the late Dr. Leroy Palmer Chappelle and Nettie “Tots” Sanders Chappelle, was born on October 11, 1933, in Columbia, South Carolina. She transitioned from this earthly life on Saturday, July 25, 2020, at the Medical University of South Carolina in Charleston. Proud of her family history, she celebrated the legacies of the Palmer, Chappelle, Sanders, and Webber families of South Carolina. Vivian was the granddaughter of the late Bishop William David Chappelle and Rosena Palmer Chappelle. She was the great granddaughter of the late Reconstructionist Robert John Palmer and Julia Simon Palmer. Vivian lived an extraordinary life on her own terms, especially for a young lady from the segregated South. She was a graduate of Mather Academy in Camden, South Carolina. While attending South Carolina State College, Orangeburg she pledged Delta Sigma Theta Sorority, Incorporated. She later transferred and on June 7, 1954, earned a Bachelor of Arts degree in Library Sciences from Smith College in Northampton, Massachusetts. She earned a Masters Degree in Library Sciences at Case Western University in Cleveland, Ohio. Her career path began as a librarian at the City Library in New York. She later became a librarian at Benedict College in Columbia. In 1964, she became staff librarian at NC A & T College (later University). Other positions after leaving the University included school librarians: Lincoln Junior High, Grimsley High School, and Dudley High School, where she retired in Greensboro, North Carolina. After her retirement, she became a caregiver for her husband, Howard Franklin Robinson, who died in 1986. She returned to Columbia and reunited with her mother on Clement Road where she remained until 1997. In 1956, she married Anthony Manigault Hurley of Columbia, and to this union her only child, a son Anthony, was born on September 17, 1957. In December of 1965, she married Howard Franklin Robinson, who was Vice Chancellor at NC A&T, and they resided in Greensboro, North Carolina, for over twenty years. Her final marriage was to J.T McCants of Columbia. In 2000, Vivian moved to Sun City and later to The Cypress on Hilton Head Island, South Carolina. Vivian enjoyed her relaxed, Island lifestyle where she was free to cultivate many meaningful friendships. She even helped to organize and charter the first alumnae chapter of Delta Sigma Theta Sorority, Incorporated on Hilton Head Island. At The Cypress, she was treated as “royalty,” enjoying the many activities, field trips, Sunday brunches, playing bridge, arts and crafts, mastering her culinary skills, sharing recipes and spending quality time with friends and family. Every year she sponsored the Advance of Gullah Culture Program, which focused on artifacts of Black achievement. In her spare time, she volunteered in the schools to read books on Black achievement to the children. Vivian especially loved her family, the study of genealogy, history; researching roots and generational family recipes to pass down occupied much of her time. The other passion in her life was for travel, which was extensive. Her trips included: Russia, Korea, South Africa, Australia, Europe, the Islands and South America. After a trip to Brazil, she encouraged the family to explore their Afro-Brazilian roots. She was truly a student of the world, always expanding a global connection that she felt was critical to her very soul. She possessed a natural curiosity about every culture, and traveling alone was her preference in experiencing what every country had to offer. As she matured, she would allow maybe one (never more than two) friends to join in her international escapades. As a result, Vivian had a plethora of diverse friendships from around the world that she maintained. Between her travels, artistic and culinary creations, connections within her senior and church communities, reading and researching historical works, providing oral history about her family, life was never boring (until the Coronavirus came and attempted to give her “cabin fever”). What a fascinating life that kept her young in spirit and energy for eighty-seven years! In addition to her parents, grandparents and other ancestors, she was preceded in death by a brother from her father’s first marriage, Leroy Palmer Chappelle, Jr., and an uncle Talmadge Chappelle and his son, William David Chappelle. Surviving are her son, Anthony Chappelle Robinson and his wife Monica Justina Motley Robinson; three grandchildren: Adam Palmer Robinson, Savannah Noel Robinson and Adria Wynn Robinson; two nephews: L. Palmer (Geralyn) Chappelle, III, and Charles Gregory Chappelle; a grandniece Sarah Elizabeth Chappelle; two grandnephews: Cameron Blake Chappelle and Cassidy Skylar Chappelle; a host of special Palmer, Chappelle, Sanders and Webber cousins and other relatives; and dear friend, Dennis Reddick. Memorial contributions may be made to the National Museum of African American History and Culture http://nmaahc.si.edu/connect/give or Allen University Chappelle Memorial Fund 1530 Harden Street Columbia, SC 29204.

Vivian Lorraine Chappelle Robinson, the only child of the late Dr. Leroy Palmer Chappelle and Nettie &#8220;Tots&#8221; Sanders Chappelle, was born on October 11, 1933, in Columbia, South Carolina. She transitioned from this earthly life on... View Obituary & Service Information

The family of Vivian Lorraine Chappelle Robinson created this Life Tributes page to make it easy to share your memories.

Vivian Lorraine Chappelle Robinson, the only child of the late...