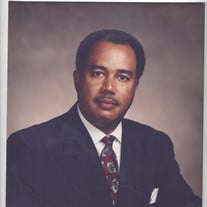 Willie Lee Catoe, affectionately known as Lee, entered into eternal rest on June 3rd, 2021 at Prisma Health Baptist Hospital in Columbia, South Carolina. Lee was the youngest son of eleven children, born on March 26th, 1947 in Flat Rock, SC to the late Reverend Henry and Carrie Drakeford Catoe. He received his early religious training at Flat Rock Missionary Baptist Church in Westville, South Carolina. Upon relocation to Columbia, he joined Second Calvary Baptist Church. He was a faithful and dedicated member, and served on the Board of Deacons, Brotherhood Ministry, and Calvaliers Choir. After graduating from Jackson High School in Camden, South Carolina in 1965, he continued his education at Edward Waters College in Jacksonville, Florida, where he earned a Bachelor’s Degree then later obtained a Master’s Degree from the University of South Carolina. He did further study at Arizona State University, University of Georgia in Athens and Emory University. Upon graduation from Edward Waters College, Lee was drafted into the United States Army where he served honorably in the Vietnam War. Lee retired from the Greater Columbia Chamber of Commerce (GCCC) where he served as the Vice President for Community Affairs and Special Assistant to the President/CEO. Prior to retirement, he served as Metro Director of the National Alliance of Businessmen, and at The GCCC as Executive Director of the Community Relations Council. While at the Chamber, he was instrumental in the implementation of the current form of city government, the 4-2-1 Plan. He then went to work under Governor Carroll Campbell as the Executive Assistant to the Governor in the Office of Executive Policy and Programs. While working here, he was appointed as the governor’s designee to serve as a member of the Board of Trustees for the University of South Carolina. He was also invited as one of the first three African American men to join the Summit Club, a private business club. From there he worked as a Commissioner with the South Carolina Workers’ Compensation Commission, then at the South Carolina Department of Alcohol & Other Drug Abuse Services (DAODAS) as the Director, where he expanded numerous programs and grants and educated youth about the dangers of alcohol abuse. Lee served on the Board of Directors of the Columbia Convention and Visitors Bureau, Columbia Museum, Richland/Lexington Counties, Cultural Arts Council, Children Unlimited, Inc. and the Columbia Housing Development Corporation. He was also on the Board of Visitors for Winthrop College, as well as a servant on the boards of the Family Service Center, Southern Regional Project on Infant Mortality, Children’s Trust Fund and United Cerebral Palsy for SC. He was a member of the Governor’s Juvenile Justice Advisory Council, Hospital Advisory and Educational Committees (SC Workers’ Compensation Commission) and Environmental Planning Advisory Committee (Central Midlands Regional Planning Council). Lee consulted with the S.C. School Board Association, Carolina Society for Training & Development, Benedict College, National Commission on Career Education and the National Conference of Christians & Jews. He also served as a Statewide Campaign Coordinator for United Way. Lee was presented with a host of awards, two of which were Order of the Palmetto presented by the Honorable Carroll A. Campbell, Jr., Governor of S.C. and the Outstanding Black Alumnus award, presented by the Greater University of SC Alumni Association. Aside from serving his community, Lee was an avid outdoorsman, and enjoyed spending time with his family, especially his grandchildren who called him “Papi”. In addition to his parents, he was preceded in death by his brothers, Pernell W. Catoe and Henry Catoe, Jr., and three sisters: Mattie C. Allen, Jessie C. Drakeford and Elizabeth R. Catoe. He leaves to cherish precious memories his wife Dr. Stephanie Lewis Catoe; his son, Lee Toddson (Shana) Catoe; grandson, Toddson Kevon; and two granddaughters, Michaela Aleisha and Lauryn Elizabeth;five sisters: Sarah (Nathan) Thomas, Florine Simons, Henrietta (Benjamin) Giles, Clemijene (Willie) Alexander and Marian (Roger) Fletcher; a mother-in-law Zinie Murray Lewis; sister-in-law C. “Kaye” Lewis Jefferson; brother-in-law Clarence Allen; and a host of nieces, nephews, relatives and friends. In lieu of flowers, please consider donations to St. Jude’s Children’s Hospital or to a charity of one's' choice.

The family of W. Lee Catoe created this Life Tributes page to make it easy to share your memories.

Send flowers to the Catoe family.