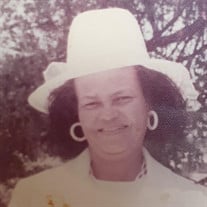 Mrs. Wilhelmina Jacobs Rivers, daughter of the late Jerry Ricks and Susannah Wright Bowen, was born March 15, 1929, in Sumter County, South Carolina. She entered into eternal rest on Saturday, July 10, 2021, at Prisma Health Tuomey Hospital, Sumter, S.C. She was educated in the public schools of Sumter County. She was employed by Sumter School District 2 and retired after more than twenty-five years of dedicated service. Mrs. Wilhelmina was a life-long member of Wayman Chapel AME Church. She attended the church and served as a member of the Stewardess Board and a member of the Wilhelmina “Sweetheart” Burgess Missionary Society. She was married to the late James Rivers, Jr. Six children were born to this union. She was predeceased by two of them. Mrs. Wilhelmina had a sweet loving spirit and well-liked by all who knew her. She was mild mannered but was a strict disciplinarian to her children. She had a no nonsense attitude toward life and this was evident when she interacted with family and friends. She leaves to cherish precious memories: three sons, James (Lula) Rivers, Decatur, Ga., David Rivers, Dalzell, S.C., Jerry (Sarah) Rivers, Bronx, N.Y., and a devoted daughter, Cynthia (Joseph) Whiting, Dalzell, S.C.; Brothers, Louis Jacobs, Wedgefield, SC, Benjamin F. Bowen, Sumter, SC, Sammie L. Ricks, Sr. and James Ricks of Sumter, SC; Sisters, Elizabeth Sumter, Sumter, SC, Susanna Swanson, Burlington, NC, Ruth Jackson and Mary Geter of Sumter, SC, Annie Mae DeBreaux of Hampton, Va.; eight grandchildren, 11 great grandchildren, 14 great great grandchildren, a host of nieces, nephews, other relatives and friends. She was preceded in death by four brothers; Charlie Jacobs, Johnny Jacobs, Eugene Jacobs, and Joseph Ricks; a sister, Marie Ricks Gary. To access the livestream of the service, please go to Facebook.com, search for Palmer Memorial Chapel Inc., and "like" the page. The livestream video will begin at the designated time of the service.

The family of Wilhelmenia Rivers created this Life Tributes page to make it easy to share your memories.

Send flowers to the Rivers family.