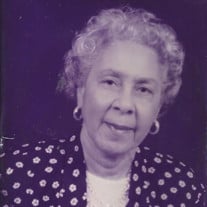 Retired educator, Mrs. Wilhelmina Myers Kershaw of Columbia transitioned peacefully Sunday, September 27, 2020, at Prisma Health Richland, in Columbia, South Carolina, following a brief illness. Born February 4, 1924, in Beaufort, South Carolina, Mrs. Kershaw was the fourth of five daughters born to the late Joseph Gresby Myers and Mabel Culler Myers, both of whom were educators. She was preceded in death by her parents, her beloved husband Herbert N. Kershaw, and her sisters: MaeDe Myers Brown, Barbara Myers Freeman, Doris Myers Dean, and Dr. Alba Myers Lewis. Wilhelmina attended Felton Laboratory School of South Carolina State College (now University) and graduated with highest honors from Robert Smalls High School in Beaufort, South Carolina. She was valedictorian of her class at South Carolina State College, where she received her B.S. degree in Secondary Education with a major in English and an M.S. degree in Guidance. She completed additional studies at the University of Pennsylvania, Columbia College, and the University of South Carolina. Certified in English, secondary teaching, guidance, supervision and administration, she was employed by Richland School District One for thirty-three years. A redoubtable English teacher, she also served as Director of Guidance and retired as the Assistant Principal at C.A. Johnson High School in 1979. A faithful, longtime member of Second Calvary Baptist Church, she served in the Trustee Ministry and as Church Historian. She was a member of Church Women United and the Golden Eagles Club and was a past Woman of Faith honoree (2010). Mrs. Kershaw’s professional memberships included: South Carolina Education Association; Richland County Education Association; National Education Association; and Palmetto Education Association. She demonstrated her dedication and commitment to quality education for all, serving on numerous boards and committees in her church, profession, and community. Committed to helping the youth of her community, this outstanding educator also devoted time, energy, and financial resources to many religious , fraternal, civic and social organizations. She was a member of the Work Support Community Advisory Council and a Board member of the Central Midlands Regional Planning Council and Friends of the Library. She was the recipient of myriad awards, citations, and commendations in recognition of her service and served as a role model for many. Inducted into the Alpha Xi Chapter of Delta Sigma Theta Sorority, Inc. at South Carolina State College, Mrs. Kershaw loved and was devoted to the Sisterhood. She held many leadership positions in Delta and served as President of the Columbia Alumnae Chapter from 1969-1971. She received the Lifetime Commitment Award and became a treasured "Delta Dear" in May 2013. She was honored by the Pan-Hellenic Council 2015. Mrs. Kershaw was a past president of the Columbia Chapter, Jack and Jill of America, Inc. and a member of the Greenview Neighborhood Association, the NAACP and AARP. An avid bridge player, she was a member of two bridge clubs: The Tuesday Morning Club and Les Jeunes Jouers de Bridge (the Young Bridge Players). She especially loved the camaraderie and friendships in Les Chapeaux Rouges Chapter of the Cluster Four, Red Hat Society! Survivors include her devoted daughter, Dr. Linda L. Kershaw; godson James Bryant, III; a host of nieces, nephews, grandnieces and nephews, great-grandnieces and nephews, cousins, colleagues, former students and friends who will miss her dearly. In lieu of flowers, it is suggested contributions be made to the following: Second Calvary Baptist Church; the Columbia Alumnae Chapter, Delta Sigma Theta Sorority, Inc., the C.A. Johnson High School Scholarship Fund; and South Carolina State University.

The family of Wilhelmina Myers Kershaw created this Life Tributes page to make it easy to share your memories.

Send flowers to the Kershaw family.