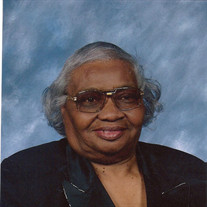 Wilhemenia Nelson Sanders was born June 22, 1927 in Alcolu, South Carolina to the late George Nelson, Sr. and Emma Blanding Nelson. She entered into eternal rest on Friday, January 25, 2019 in Florence, South Carolina. At an early age the family moved to Sumter. She was educated in the public Schools of Sumter County and attended the Historc Lincoln High School.She moved North, where she lived and worked in New York City and Washington, DC before returning to Sumter. Shortly after her return to Sumter, Mena met and married her husband of 55 years, Samuel. Mena, as she was so affectionately called, accepted Christ at an early age and was baptized at Jehovah Baptist Church by Rev B.F. Weston. Later, she attended Salem Baptist Church, before returning to Jehovah Missionary Baptist where, she was formerly president of the Missionary Society and the Y.W.A. In addition to her parents, she was predeceased in death by a brother, George Nelson, Jr. and a nephew, Carl A. Nelson. She is survived by her loving, devoted, caretaker and husband of 55 years, Samuel Sanders, Jr.; one daughter, Valerie A. Sanders-Wells, Sumter South Carolina; four grandchildren: Yiesha A. Wells, DeVante Ricardo Sanders, Yidaja L. Sanders and Yiasia L. Sanders; two great-grandchildren: KeVante Ricardo Sanders and Anthony K. Addison.both of Sumter, SC; a brother, James (Lillian) Nelson, Brooklyn, NY; sister-in-law, Rebecca W. Nelson of Sumter, and a host of nieces, nephews and cousins.

The family of Wilhemena N. Sanders created this Life Tributes page to make it easy to share your memories.