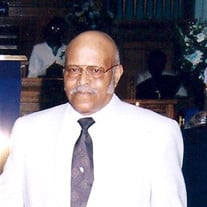 William Edward DeLaine entered into eternal rest on Saturday, March 16, 2019 at Prisma Health Tuomey in Sumter South Carolina. Born in Morristown New Jersey on June 12, 1930, he was the eldest of three children born to the late Woodard A., Sr. and Josephine Gregory DeLaine. He was a graduate of Morristown High school in the Class of 1948. William served his country in the United States Army from October 1951 to July of 1953. He was ranked as a private First Class who served in the Korean War. After serving his country, William worked with his father at the Morristown, New Jersey Water Department. In 1959, he joined the Morristown, New Jersey Police Department. Later, he completed further law enforcement training at the SeaGirt Police Academy in SeaGirt New Jersey. He was employed for twenty five years (25), with the Morristown Police Department and retired in March of 1984. William was a former member of the Tyrian Lodge #34 F&AM, P.H. A., in Morristown, New Jersey. In 1995, he moved to Sumter and joined the Mt. Pisgah A.M.E. Church. In his spare time, he enjoyed wood-working, fishing and reading. He also enjoyed watching western movies and T.V. shows. William was an avid sports enthusiast of basketball, baseball and football. He enjoyed domestic and international travel. His favorite phrases were “Doggone” and “That’s the God’s honest truth”. William was unwaveringly staunch in his beliefs; he left no doubt about his position on his political or personal convictions. In addition to his parents, he was preceded in death by a daughter, Teretha Wilkerson and a brother, Woodard A. DeLaine, Jr. He Leaves to cherish precious memories; his devoted daughter, Gwyneth DeLaine-Dale and her husband, James Dale of Monroe, NC; a granddaughter, Lea Poole ( Darnell) Harris of Plainfield New Jersey; two great-grandchildren, Zoe and Zavien also of Plainfield, New Jersey; a former wife, Wilma Croft of Monroe, North Carolina ; a sister, Jean Walton of Sumter; two nephews, Brian and Stephen Walton; two nieces, Janet (Miguel ) Flores and Debra Bredehorst ; a stepson, Edward A. Simmons and a host of other relatives.

William Edward DeLaine entered into eternal rest on Saturday, March 16, 2019 at Prisma Health Tuomey in Sumter South Carolina. Born in Morristown New Jersey on June 12, 1930, he was the eldest of three children born to the late Woodard A., Sr.... View Obituary & Service Information

The family of William Edward DeLaine created this Life Tributes page to make it easy to share your memories.

Send flowers to the DeLaine family.