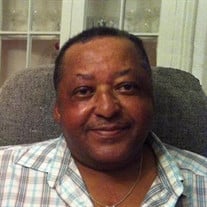 Mr. Willie Lee Hardy, Sr. departed this earthly life on March 14, 2017 at the Medical University of South Carolina, Charleston. Born in Sumter County, he was a son of the late Mamie Pinckney Hardy and Nathaniel Hardy. Willie was educated in... View Obituary & Service Information

The family of William Lee Hardy Sr. created this Life Tributes page to make it easy to share your memories.

Send flowers to the Hardy family.