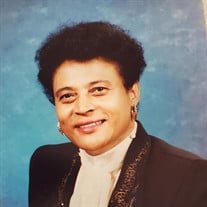 Mrs. Willie Omia Jamison Bouie transitioned from this earthly life at her residence on Wednesday, March 2020, in Columbia, South Carolina. Born January 17, 1942, in Sharon, South Carolina, she was the daughter of the late Mabel Mutz and John Jamison. A 1959 graduate of Jefferson High School in York County, she graduated with honors from Claflin University in 1963, acquiring a Bachelor of Science degree in both Biology and Mathematics. She then went on to earn a Master's degree in Biology from Iona College in 1977, and received a Doctorate of Humanities degree in July 1988 from Monrovia College in Liberia, West Africa. Willie moved into professional career with integrating Handy Middle School, Brookland-Cayce High School, and Keenan High School in South Carolina by serving as the first Black science and math teacher at those schools. She taught science for a number of years at W.A. Perry Middle School. Mrs. Bouie retired as a Biology and Forensics teacher for Rockville School District in Rockville Center on Long Island, New York. Willie was extraordinarily dedicated to her alma mater. She has been a steadfast supporter of Claflin University, and was featured in the "Spiritually Speaking: A Collection of Poetry." Heavily involved in the Civil Rights Movement, she was arrested on several occasions along with her husband, Civil Rights activist Rev. Simon P. Bouie, with whom she shared fifty-three years of marriage. Willie was a member of Chappelle Memorial AME Church where she served as a part of the Women's Missionary Society, Church School leader, Vacation Bible School instructor, and wherever else she was needed. She was Life Member of the NAACP, a Life Member of the Claflin Alumni Association, as well as a member of many other social and fraternal organizations. Willie also served as the First Lady of the oldest African Methodist Episcopal Church, Mother Bethel AME Church in Philadelphia, Pennsylvania. She also served in various leadership roles such as the Women's Missionary Society in the First Episcopal District. In addition to her parents, she was preceded in death by a brother Oscar Jamison. Precious memories will be cherished by her husband, Civil Rights activist and retired Rev. Dr. Simon P. Bouie; their sons: Harold (Mika Kakehashi) Bouie, Sr. and Erich Bouie; three grandchildren: Yu Ota-Bouie, Sasha Bouie, and Harold Bouie, Jr.; brother Joseph (Luvenia). Other family members include Brenda Moffett (Tamerat) Worku, Toschia Moffett (Alex) Young, Trey Young, India Young, Quincy Richardson, goddaughter Betty Ann Walker, godson Rev. Leroy Ladson, and Hiromi Ota . Willie also leaves to cherish her memory with a host of other family members and friends. The family would like to thank the Heart of Hospice along with a special thanks to the nurses Sharn Jee Primus, Christina Lopes along with caretakers that served the family and Mrs. Bouie: Tonjia Allen, Valencia Thompson, and Elise Davies. The family requests that in lieu of flowers, contributions be made to Chappelle Memorial AME Church Building Fund or the St. Paul AME Church Senior Citizens Fund.

Mrs. Willie Omia Jamison Bouie transitioned from this earthly life at her residence on Wednesday, March 2020, in Columbia, South Carolina. Born January 17, 1942, in Sharon, South Carolina, she was the daughter of the late Mabel Mutz and John... View Obituary & Service Information

The family of Willie Omia Bouie created this Life Tributes page to make it easy to share your memories.

Send flowers to the Bouie family.