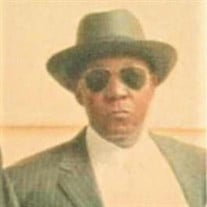 Willie Ned Dicks, son of the late Willie and Edith Ned Dicks and the late Grandfather James Ned, was born the eldest of two children. He attended Liberty Street School Elementary School, Bates Junior High School and graduated from Lincoln High School (Bulldogs) Class of 1959. Upon graduation, Wille entered the US Army under the buddy program, as an infantry specialist. He completed basic military training and Army specialty training at Fort Jackson, SC. Willie served with distinction in Berlin, Germany, Fort Dix New Jersey, and Fort Knox Kentucky. Upon transitioning from the US Army, Willie began a long and fulfilling career with the Southeastern Pennsylvania Transportation Authority (SEPTA) which lasted well over 25 years. While in Philadelphia, he met the love of his life, Mary Ann Lee. And on September 23, 1995, they were united in marriage; living in Philadelphia, PA (3 years); and Burke, VA (7 years) until they relocated to Sumter in retirement 2005. Upon relocating, Willie reconnected with his family church, Bethel AME, where he served in numerous capacities including Usher, Choir, Board of Trustees, Sons of Allen, Men of Bethel, and wherever his gifts and talents were needed. In his spare time, he enjoyed football (Dallas Cowboys forever), landscaping, auto maintenance and playing cards with family and friends. In addition to his parents, he was preceded in death by his sister Myra Ned and his son Vincent Delay. He leaves to cherish precious memories his beloved wife, Mary A. Dicks, a daughter Victoria Delay of Sumter, sons, Ned Kauter of Berlin, Germany and Antony Dicks of Philadelphia, PA; two granddaughters (Danika and Erica Delay of Sumter) and one grandson (Aaron Dicks of Philadelphia, PA) three great grands and a host of other relatives and friends. In lieu of flowers, memorials may be made to the Lincoln High School Class of 1959 and Bethel AME Church at 218 East Calhoun St. Sumter, SC 29150

The family of Mr. Willie Ned Dicks created this Life Tributes page to make it easy to share your memories.

Send flowers to the Dicks family.