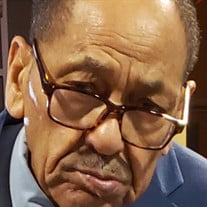 Winton Anthony Solomon, age 85 of Lynchburg, South Carolina was born on February 20, 1935 passed away on January 28, 2021. He is preceded in death by his parents, Sam Wescott and Calperty Solomon; 5 brothers, Sam Solomon Jr. Eleazer Solomon, Zaddock Solomon, Thomas Solomon and James Solomon; and 1 sister, Julia Solomon Wilson. He is survived by his two sons Wescott D. Solomon of Hillside, New Jersey and Terrell A. Solomon of Stockbridge, Georgia; One grandson, Kyle Solomon of Bloomfield, New Jersey. Winton was born, raised and lived in Lynchburg, South Carolina until his health began to fail in 2015. At that time, he moved to Ellenwood, Georgia than to Stockbridge, Georgia to live with his son Terrell. He attended Lee County Public Schools and in 1952 he graduated from Dennis High School in Bishopville, South Carolina. He earned a Bachelor of Science in Mathematics from Morris College, Sumter, South Carolina in 1956. Winton served as a teacher in Darlington County Public Schools. After leaving the school system, as loyal son, Winton carried out his dream of keeping his father’s legacy alive by continuing to cultivate the family farm. Winton worshiped at the Mount Pleasant, A.M.E church in Elliott, South Carolina. He loved to listen to Sam Cooke and his favorite song was “Ain’t That Good News.” Please consider a donation to SARDAA – Schizophrenia and Related Disorders Alliance of America in his name. Services will be live streamed on Facebook "Palmer Memorial Chapel, Inc.".

The family of Winton Anthony Solomon created this Life Tributes page to make it easy to share your memories.

Send flowers to the Solomon family.