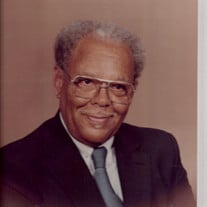 Zurie S. Scarborough was born on January 26, 1917 in Sumter, S.C., a son of the late Enos Albertus Scarborough and Minnie Keith Scarborough. He departed this earthly life on Wednesday, March 23, 2016 at the William J. Dorn VA Medical Center in Columbia, South Carolina. He was married to the Late Rosa L. Scarborough. Mr. Scarborough received his former education in the public schools of Sumter, SC and attended Morris College of Sumter. He enlisted in the United States Army in 1941 and served in the 2032nd Quartermaster Company as a First Sergeant in World War II and received an honorable discharge in 1945. He served his country for four years. During his military tour of duty, he received the American Service Medal, the European African Middle Eastern Service Medal Award and the Good Conduct Medal. He was also affiliated with the Veterans of Foreign Wars and American Legion. He relocated to New York City and worked with the New York City Transit Authority until his retirement. In 1988, he returned to his native home in South Carolina and joined membership with Mt. Pisgah A.M.E. Church of Sumter. In his spare time he enjoyed working in his yard and playing card with his friends In addition to his wife and parents, Mr. Scarborough was preceded in death by: three siblings; William Scarborough, Clyde Scarborough and Ollie S. Heyward; and one nephew, James Scarborough. He leaves to cherish his precious memories: two nephews, Darryl Z. (Verlencia) Johnson of Sumter, South Carolina and William (Andrea) Scarborough of Jamaica, New York; one niece, Carol (Ronnie) Carter of Plainfield, New Jersey; two grandnieces, Chantal D. Johnson, Columbia, South Carolina and Alicia Scarborough; and a grandnephew, Jay (Jessica) Scarborough all of Atlanta, Georgia and many other loving relatives and friends, who will miss him dearly. The family will receive friends from 5:00-7:00 pm on Monday at Palmer Memorial Chapel, 304 South Main St., Sumter. Mr. Scarborough will be placed in the church at 9:00 am for further public viewing until the hour of service.

The family of Mr. Zurie S. Scarborough created this Life Tributes page to make it easy to share your memories.

Send flowers to the Scarborough family.